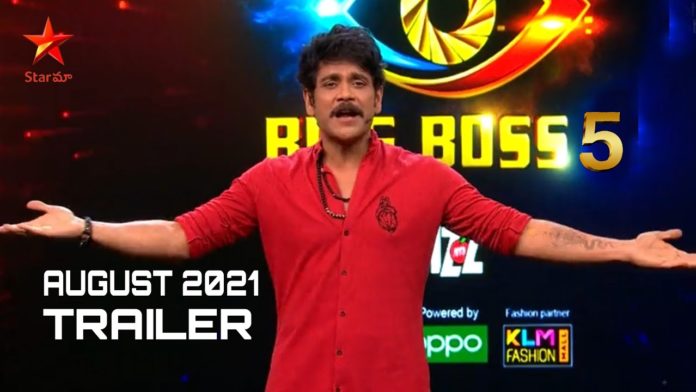 All the shows aired on Telugu television will be popular with the audience. Suppose there is a show that runs with any new content like that. We can not even say whether it will actually click. Similarly, coming to Telugu five years ago the Bigg Boss show became a super success in a way that no one expected. Moreover, it has already completed four seasons in a row. The fifth is now going to launch it in this order as well. In this context, the latest date to start this season has been leaked.

The Bigg Boss show in Hindi started almost fifteen years ago. It has since been aired in several languages. It was in this order that it was also introduced into Telugu five years ago. The show has seemed a bit unfocused in recent episodes. But, dispelling everyone’s suspicions it became a super-duper hit. The result has already been completed four seasons.

The Bigg Boss show in Telugu is gaining more popularity than all other languages. There are many reasons for this. Most importantly, the heroes who have hosted it so far have also played a major role in this success. The first season was NTR, the second season was Nani, and Nagarjuna co-hosted the third and fourth seasons with their excellent hosting.

The Bigg Boss show airs in many languages ​​across the country. However, the Telugu version is gaining more popularity everywhere. That is why new records are being set here every year. Most importantly, the fourth season premiere episode hosted by Akkineni Nagarjuna got a rating of over 18. This broke national-level records in the TRP.

The Bigg Boss show has been airing in Telugu every year since its inception. It is in this order that the time for the fifth season is now approaching. However, in the current situation, it is doubtful that the show will start. Moreover, rumors have been circulating that there will be no Bigg Boss show this year. This is due to COVID 19 second wave.

The news is coming that the fifth season will be this time as well under any circumstances. At the same time, some names are coming up on the screen that the contestants can’t. Not only that, it is coming in that month. Rumors are circulating that it will be aired this month. All the fans are confused as they do not know what is actually going on in the fifth season.

One of the latest pieces of information about Bigg Boss fifth Season has just come out. Accordingly, this season will start on Sunday evening, September 5th. It seems that Akkineni Nagarjuna is going to host this too. In addition, the promo for him will be released on August 29 on the occasion of Nag’s birthday.

Another piece of news is going viral that the selection process of contestants for the fifth season of Bigg Boss is still going on even though the outside conditions are not good. Nearly a hundred celebrities are said to have recently made the shortlist. It is learned that interviews are being conducted with him through Zoom Call. The talk is that many have already made it to the finals.