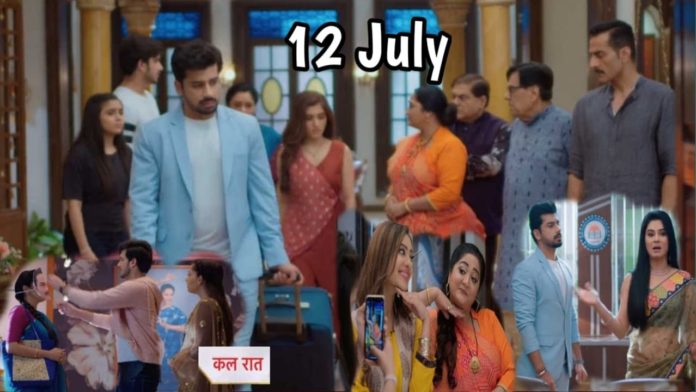 Vanraj makes up his mind to open a cafe in Anupama’s dance academy itself. Seeing this, both Samar and Kavya are very angry. At the same time, Anupama’s family is going to be separated soon. Know about the latest episode of Anupama.

After a lot of hard work, Samar and Nandni have prepared Anupama’s dance academy. On the other hand, Vanraj will start his cafe work there. Samar gets very angry knowing this. On the other hand, Kavya is also enraged by Anupama’s idea. In the midst of all this, Rakhi listens to Dave Toso to separate him from the family. Know what will happen tonight in the latest episode of Anupama.

Kavya is furious with Anupama’s idea to Vanraj. Kavya thinks that she must somehow find a job for herself. Suppose she stays strong with money. Only then will his family not take him away. In any case, Kavya has started trying to get herself and Vanraj’s job.

Samar angry with Anupama
Samar gets very angry with his mother Anupama for suggesting Vanraj open a cafe in his dance academy. Samar is furious when Anupama comes to celebrate him. Samar reminds mother Anupama how Vanraj broke her ghungroo. Also how he did not like to dance at all. Samar explains to Anupama that many people do not deserve her goodness.

Babu tells Babuji how Kavya went crying with her head in his lap. Babuji gets very surprised to hear this. Babu tells Babuji that Kavya is irritated because of being Anupama. Now his job has also gone. In such a situation, his mind remains bad. Bo goes to Kavya’s room to talk to her.

Vanraj asked Babuji about Samar
Vanraj sits down to calculate with Babuji. Vanraj asks Babuji if Samar said anything. So Babuji says that he is angry. Vanraj understands this and says that he knows that Samar has worked hard to open a dance academy for Anupama. In such a situation, now he is going to work there. Babu ji says that Anupama is there, she will explain to Samar.

Anupama became Vanraj
Due to Vanraj’s work in the dance academy, Summer vents his anger by dancing. He is upset and cries. Nandani gets very upset seeing this. Nandani shouts at Samar and asks why there is any need to be so angry. Then Anupama comes to Samar wearing Vanraj’s mask on her mouth. Anupama tells Samar that he wants her to become like Vanraj, so she has become. Samar says that Vanraj is a bad person. Anupama explains to Samar that he is a bad person, but his time is bad right now. Anupama reminds Samar that this is the factory. It belongs to Babuji. Vanraj has more right on this than him.

Baa spent fun moments with Kavya
Baa goes to meet Kavya. Kavya is crying. So Bo asks her if she is upset because of her job. So Kavya says no. Bo asks why she is crying then. Kavya says that while fixing her hair, her hand got burnt. Seeing this, Bo is surprised and starts laughing at Kavya. Kavya does her makeup while spending time with Bow. Sweety, who came to give tea, is surprised to see Bo and starts clicking pictures of Bo. At the same time, Bo explains to Kavya that she should support Vanraj. Fulfilled the duty of a wife.

Sweety was also surprised to see Bo
Sweety shows her papa Vanraj beautiful pictures of Bo and tells her that Kavya has prepared. Kavya’s Vanraj messages and says thanks for behaving well with Bo. Kavya also says that Bo also treated her very well. Vanraj tells Kavya to give her three months. If nothing happens in three months, what she says will happen. Hearing this, Kavya also gives Vanraj three months.

Vanraj-Anupama’s new relationship
Anupama returns from work. Vanraj asks Anupama if Samar’s mood is fine. Anupama says that yes, she is fine. Then Vanraj tells Anupama how strange it is. Divorced but still living together and will also work now. Earlier, there was a relationship, so he could not keep his respect. At the same time, if there is any name of the relationship, they cannot keep the name.