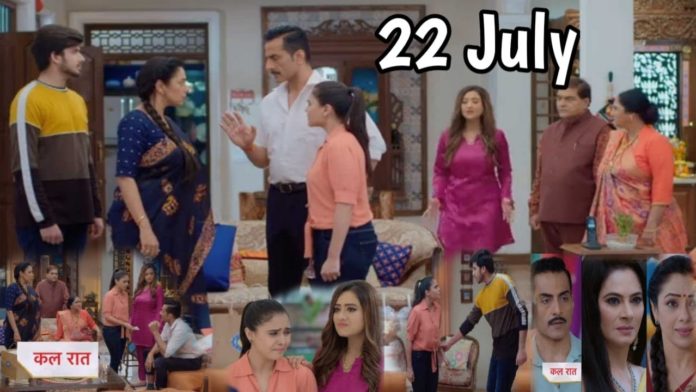 Vanraj is working very hard to run his cafe. While Anupama is helping Vanraj, in the meantime, Pakhi ruins the food ordered from the cafe. Seeing this, Anupama starts Pakhi’s class. Know about the latest episode of ‘Anupama.’ At the behest of Kavya, Pakhi asks for more food from Papa Vanraj’s cafe. Pakhi’s friends eat little food and leave.

After coming home, Anupama gets very angry seeing the food being wasted in the cafe and scolds Pakhi. Pakhi gets angry with Anupama and Bo’s scolding. Seeing this, Vanraj also gets angry and starts getting angry at Anupama. Know what will happen in the latest episode of the show Anupama tonight.

Pakhi gets scolded by mother Anupama
Anupama gets furious on seeing the food being wasted in the cafe. Anupama scolds Pakhi and asks if she has ever seen the farmer, how he works hard, and yearns for every drop. Anumpa scolds Pakhi and asks her to set fire for Rs 3500. Pakhi gets shocked seeing that. Anupama explains to Pakhi how she ruined so much food. She cannot eat food, even a dog or a cow. Vanraj tries to stop Pakhi, but Anupama does not listen.

Anupama got angry on Vanraj for ordering
Vanraj Anupama tells that not to increase the talk. Anupama tells Vanraj that when the driver came, why did he not refuse to order. Then Vanraj says that Pakhi’s order was so. Anupama tells Vanraj that everything should be explained equally to the child. Samar also tells Pakhi how childish she is behaving. There is a fight between Samar and Pakhi, and Pakhi starts crying. Seeing this, Vanraj shouts and silences both of them.

Anupama replied to Kavya
Seeing Pakhi crying, Kavya supports her. Then she tells Anupama that she will give money for the food. Vanraj tells Anupama that Pakhi is the beloved daughter of the house. She will do whatever she wants. Anupama explains to Vanraj that it is Pakhi’s fault and he should make him realize it. Kavya accuses Anupama of being annoyed with Pakhi and her bonding. That’s why she is doing so much drama. Then Kavya says that she will give money for food. Just then, Anupama reminds Kavya that the cafe belongs to her husband and not hers. Anupama goes to her room in anger.

Pakhi gave money for food
Vanraj goes to Anupama’s room to talk. But Anupama refuses to talk. Vanraj says that if you don’t talk, then listen. But she still doesn’t talk. Anupama comes back and packs the leftover food. Then Mama and Bo refuse to eat the food. Kavya sees this and says that all this happened because of Anupama. Just then, Pakhi comes and gives Vanraj the money for the food ordered.

Anupama and the whole family get shocked seeing this. Pakhi says that she will give full money whenever someone orders. Pakhi misbehaves with Bo. At the same time, when Anupama asks Sweety to eat food, she says in response that she will not eat food. Otherwise, he will have to pay his money too.

Vanraj got angry after scolding Pakhi
Pakhi enters the room without listening to Anupama. Then Samar also runs after him. Vanraj tries to stop Samar, but he says that if your daughter does not listen to my mother, then she will not listen to her too. Sweety gets furious seeing Samar in the room. Below Vanraj and Anupama argue about scolding Pakhi. Vanraj tells Anupama that today because of him, his daughter will sleep hungry. But Anupama says that she is his mother and knows better than her when she is hungry or not.