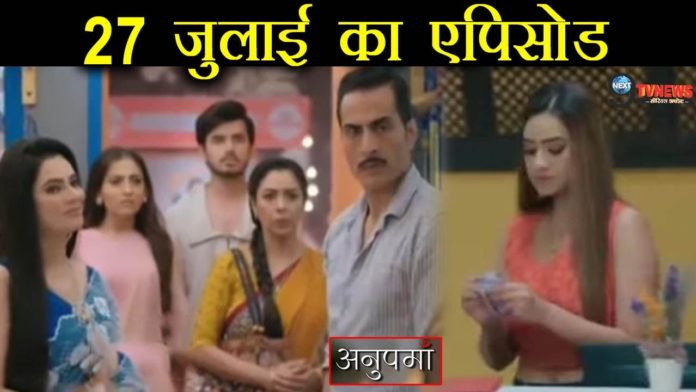 Vanraj has high expectations from his cafe. Everyone is trying to make Vanraj’s Cafe a success. Nandani shares the details of Vanraj’s cafe on social media. After which a famous food critic agrees to come to the cafe. Hearing this, the whole family would not only be happy but at the same time worry also drowns. Know what will happen tonight in the latest episode of Anupama.

Rakhi Dave is trying her best to take her daughter Kinchal away from Anupama’s house. She comes to the cafe and creates a tamasha, and divides the family. Along with this, she also gives money for the customers’ food sent by herself to make Vanraj look down. Seeing this, Vanraj and his entire family get sad. A new twist will be seen in the show. Know what will happen in the latest episode of the show Anupama tonight.

Kinchal apologizes for the act of mother Rakhi Dave
Seeing Vanraj upset, Kinchal comes to him. Kinchal tells Vanraj that she found out what her mother did in the cafe. She apologizes to Vanraj for his behavior. Vanraj forbids Kinchal from doing so. Kinchal tells Vanraj that she explains a lot to her mother. Vanraj tells Kinchal that this is a matter between elders. You focus on yourself and the office. Just then, Kinchal sees that a bottle of oil is kept nearby. She takes a bottle of oil and goes to Vanraj, and starts champing.

Anupama and Baa are happy seeing Vanraj champing. Baa says that she took a long time to convince the daughter-in-law, but Vanraj became wiser than her. Baa and Anupama are happy that both their daughters-in-law think of the house.

Vanraj’s family happy with the arrival of food critic Mansi Jain
Nandani comes running to Anupama’s house. Nandani says that you know food critic Mansi Jain. Bow thinks she is talking about cricket. But Kinchal explains that nowadays, people read about the place before going anywhere. Nandani says that she too shared the details of the cafe on a site. His cafe has been selected, and Mansi Jain will come to the cafe. The whole family becomes happy after hearing this. But they get tensed that nothing should go wrong.

Anupama agreed to come to the cafe
Vanraj goes to the cafe and tastes the food prepared by the chef. Vanraj does not like to eat. The chef tells Vanraj that Anupama taught this dish to cook, but still less and more remains in the food. The chef asks Vanraj to call Anupama for tomorrow. Vanraj refuses to call Anupama. Hearing this, Kavya goes to Anupama and asks for help in the cafe. Anupama agrees clearly.

Taste like Anupama missing from food
Baa cooks food with her own hands. Vanraj tastes and says that Anupama does not have the same taste. Baa says that she taught Anupama to cook. But she learned, but she could not bring that taste in her hands. Baa tries to cook again. Vanraj thinks to himself that he knows that he will not be able to taste like Anupama.