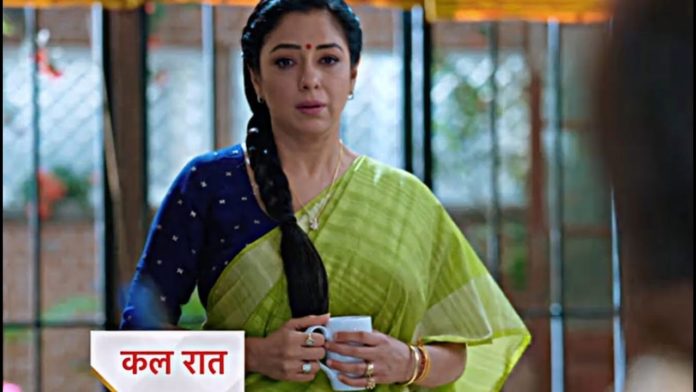 Vanraj’s cafe closes, and Kavya is fired. On the other hand, Anupama is preparing to start her dance class. Know how Rakhi Dave comes and makes a big disclosure about Kavya.

Full-on drama is going on in the show Anupama. On the one hand, Anupama has started preparing to start a dance school, fulfilling her dreams. At the same time, Vanraj and Kavya lost their jobs in a single day. Kavya vents her anger on Vanraj. But Rakhi Dave comes to the house and exposes them. Know what will happen today for the show Anupama in the latest episode.

Twist came in the life of Anupama, Vanraj, and Kavya
After the dance academy is ready, Anupama goes home from the temple. Where she happily calls Bo and Babuji. With prasad in hand, Anupama Ba narrates this happy news to the family members with tears of happiness in her eyes. On the other hand, Vanraj breaks down due to the closure of the cafe. Kavya is also very upset because of being fired from her job. Anupama says that Samar had shown this dream to her, but due to the support of the family, she has reached this point today. Everyone becomes pleased to know about Anupama’s dance academy.

Kavya got angry after hearing about the closure of the cafe
Vanraj reaches home sad. While going inside the house, Vanraj comes to know about Baba, Babuji, children about how everyone supported him. On the other hand, Kavya tells Kinchal not to tell her about going to her job in the house. Vanraj talks on the phone at home, pretending that he is talking in connection with work, but then the phone starts ringing. The whole family gets shocked seeing this and understands that Vanraj is in trouble.

Vanraj says that his friend has to sell his cafe due to compulsion. On hearing this, Vanraj’s children hug him. Anupama is giving courage to Vanraj that everything will be fine. But then Kavya comes.

Kavya loses her cool after hearing that Vanraj’s cafe is closed. She narrates to Vanraj how he is ruining his career by coming to the talk of family members. Kavya Vanraj even says that a day will come when he will set up a tea stall. On hearing this, Vanraj gets furious and says that he had listened to his heart and will continue to do the same. Kavya calls Vanraj unemployed and zeroes in front of the entire family. Then Vanraj tells Kavya, that why are you getting so upset? You have a job, a good salary. Promotion is going to happen in the coming time. Then Rakhi Dave enters.

Rakhi Dave exposes Kavya’s job loss
Rakhi Dev sees Kavya getting angry with Vanraj. Rakhi taunts Dave and asks Toshho to get the scissors. When Tosho asks why she is bringing scissors, she says that staying at home from tomorrow will help cut time. In front of the whole family, Rakhi Dave says that Mr. and Mrs. Shah were fired from the job in a single day. The whole family is shocked to know about Kavya’s job. Rakhi Dave tells how Kavya lost her job due to one mistake. But Kinchle’s promotion also stopped because of Kavya.

Kavya got support from family members
Hearing about Kavya losing her job, the whole family supports her. Vanraj says sorry to Kavya. Babu Ji also tells Kavya that he is with her. Anupama also supports Kavya. Rakhi Dave gets shocked seeing this and asks Anupama the reason for this. Anupama tells how it is a big deal for a woman to step out of the house. Then Kavya angrily says that all this happened because of Anupama.