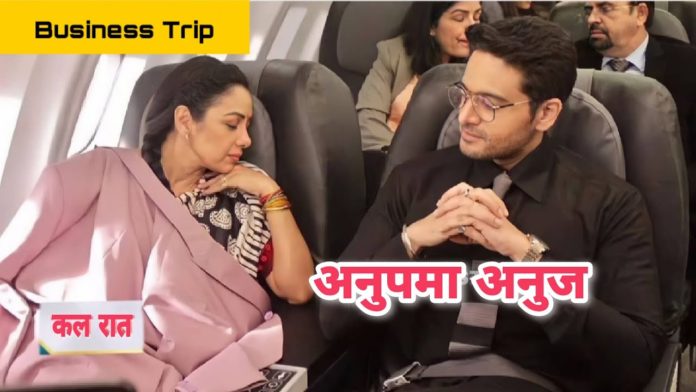 Anupama goes to Anuj Kapadia’s house with her family. Where Vanraj also reaches. There is a competition between Anuj and Vanraj. Seeing this, Anupama gets very nervous.

Anupama is all set to work with Anuj Kapadia. On the other hand, Bo, Vanraj, Paritosh, and Kavya are distraught with Anupama and Anuj’s growing proximity. Anupama has said yes to work with Anuj. In such a situation, Anuj and Anupama have come even closer. Anuj invites Anupama’s family members to his house for the Ganpati festival, where Vanraj reaches and creates a lot of commotion.

Anupama’s family members were impressed by Anuj
Anupama reaches Anuj Kapadia’s house with the entire family. Where Anuj serves breakfast to everyone, seeing this, Samar says that to date, he has only seen his mother serving. Someone is doing them for the first time. I love Anuj Kapadia’s prasad and breakfast. Everyone asks Anuj Kapadia about his cook. Then Anuj says that he has prepared this food. Everyone praises Anuj very much. Baa also gets very impressed seeing this.

Vanraj burnt after listening to Anuj’s praise
Vanraj and Paritosh also reach Anuj Kapadia’s house. Paritosh tries to stop Vanraj, but Vanraj disagrees. Anupama and her entire family are having fun with Anuj and Kaka. Samar also asks Anuj to play guitar. Anuj says that he plays guitar. Vanraj gets jealous after hearing Anuj’s praise. Anuj also informs everyone about the college. Meanwhile, Anupama says that Anuj Kapadia used to beat everyone in his claws. Kaka tells Mama that he will fight paw, but Mama Ji says that he has a pain in his wrist.

Anuj-Vanraj fought paw
Then Vanraj says that there is no pain in his wrist. Vanraj comes to Anuj’s house and seeks the blessings of Ganapati. Sweety then asks Anuj to mess with Vanraj, but Anuj refuses. Just then, Paritosh says that he has got a sprain on his wrist. Hearing this, Kaka forces Anuj to fight this paw. Vanraj and Anuj sit to fight paw. Anupama gets upset seeing this. The game starts, and everyone starts cheering for Anuj and Vanraj. Samar takes Anuj’s side. Seeing this, Paritosh tells Samar that why is he taking Anuj’s side despite his father? Samar says that when Papa can go against Mummy and support the whole world, why can’t he.

Anupama will go to Mumbai with Anuj
Vanraj says while fighting paw that he is never defeated. Anuj also says that he is not in the habit of losing. Then Vanraj wins. Everyone gets happy seeing this. Then Anuj receives a call from the office. Anuj tells Anupama that he has to go to Mumbai for a new project. Hearing this, Vanraj and Bo are shocked and upset. Anuj says that he has a hotel in Mumbai. If she goes there, she will also learn something about her hotel. Kaka explains to Bao that he cooks food in the kitchen but has to go to the market to get vegetables.

Vanraj-Baa angry at Anupama’s departure to Mumbai
Paritosh tells Anuj that his mother will not be able to accompany him. Anuj explains to Paritosh that his mother is so big that she can make her own decision. Anupama takes some time and asks Anuj at what time he has to leave in the morning. Anuj gets happy hearing this. While Vanraj, Baa, and Paritosh get angry. Kavya thinks that they cannot even get out of the house, and Anupama is thinking of going to Mumbai.

Anuj understood Anupama’s problem
Anupama, along with her family, leaves Anuj’s house. Anuj then tells how women have to fight with themselves to live a new life. Anuj says he has to catch a plane to Mumbai, but it is tough for Anupama to take a new flight.

Baa misbehaved with Anupama
Anupama reaches home. Gives medicine to Babuji. Then Baa comes and snatches the medicine box from Anupama’s hand. Bow taunts Anupama that she should go out with a foreign man and take care of her husband and family.