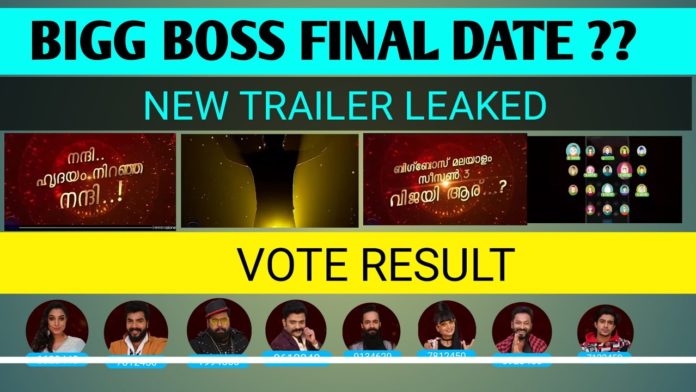 Bigg Boss is a favorite reality show for miniscreen audiences. The show, which started in Malayalam in 2018, is now in its third season. The second season was halted following the spread of the Covid19 lockdown. The third season was later started following the Covid19 norms as directed by the government. The third season of Bigg Boss Malayalam started on 14th February 2021. But as happened in Season 2, the third part was stopped by Covid. Therefore, the show has been suspended after 96 days. Bigg Boss officials are preparing to hold the finale, although the show has been put on hold.

Voting is over. The date of the finale has not been announced even weeks after the voting. This has angered the audience as a whole. Every day the audience comes to social media to question whether there will be a finale or not. But there has been no definite response from the Bigg Boss authorities. The latest news about the final is spreading. Vlogger Revathi has leaked the information through her YouTube channel. This is the answer to whether there will be a finale for Bigg Boss Season 3. Preparations for the finale have already begun.

Now there is a question that the audience raises with one mind. Who is the winner of Bigg Boss Malayalam Season 3? But be patient. There will be a grand finale announcing the Bigg Boss winner when there is a temporary cure for the current serious problems caused by the epidemic. Until then, dear audience, wait. Stay at home. Be safe ‘. That’s what the new promo video says.

Meanwhile, preparations for the finale have already begun on the part of the Bigg Boss line-up. The vaccine has been given to the entire team of Bigg Boss Malayalam. They are also trying to vaccinate contestants. This information was shared by Vlogger Revathi. This kind of precaution is taken by the rank and file to make the finale very safe. Audiences are thrilled with Bigg Boss’ latest announcement. Fans are relieved that the finale will take place.

The show ended when the Covid 19 crisis intensified. The contestants were sent home after the Covid test. As soon as they reached home, the activists informed them about the finale. Voting had begun. Bigg Boss spent a week voting to find the winner. Contestants, fans, and Army groups were all active in the voting. Anoop, Nobi, Ritu, Manikuttan, Dimple, Sai Vishnu, Kidilam Firoz and Ramzan are in the final.

Days ago, an interesting video of Bigg Boss Season 3 was shared on Asianet’s social media page. This was an interesting part of the weekly task of the university Task. Soon after the video came out, Bigg Boss discussions were raging on social media. Bigg Boss officials share this kind of Bigg Boss video after a short hiatus. Audiences at the time said it was a sign of the finale. Anyway, the audience is eagerly waiting to know the Bigg Boss Malayalam season 3 winner.